Daisy Pulls It Off 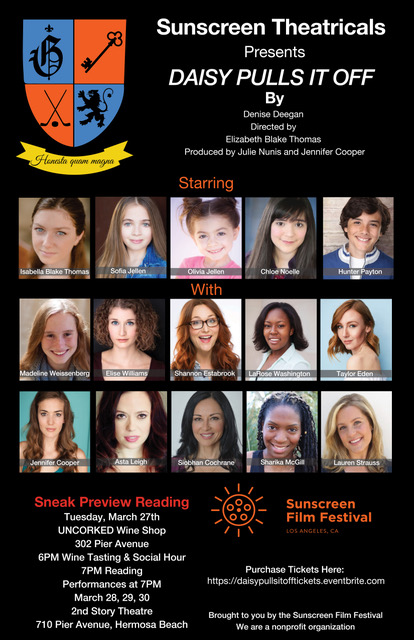 23 Mar Daisy Pulls It Off

Posted at 23:30h in All, Career by IsabellaBT 0 Comments
2 Likes
Share

When my mum was 12 she performed in a play called Daisy Pulls It Off as Daisy. It’s a play set in 1920’s England at a posh boarding school. Daisy, a shcolarship pupil, has to overcome the stigma attached with scholarships and prove that she has as much right as the other girls to be at Grangewood School For Girls. Along the way, Daisy searches for the Beaumont treasure which, if found, will aid the Beaumont family in keeping the school.

When we first moved over to LA mummy began carrying the play book in her bag in case anyone ever needed a play. One day in February, a former student of my mum’s approached her asking if she knew of any plays that could be put on in Hermosa. My mum remembered that she had DPIO in her bag and that was how the Hermosa Beach. Sunscreen Theatricals performance of Daisy Pulls It Off was born.

I play the character, Mademoiselle. The scatterbrained french mistress at Grangewood. I loved taking part in this performance because even though I was a small part, with my mum directing, I had the ability to help out back stage, with props, costumes and even advertising. It was really interesting seeing a play put together because, even though I had done a play in the west end, I had never really gotten to see the full journey of a theatre show from start to finish. I learned many new things including, how much time and money can be put into the play to make it good. I learnt that it’s a job in itself to sort out where props should be backstage and who should be taking them on and off stage and when. The most useful piece of knowledge I learnt was that you should learn the other roles parts in your scenes as well so that if someone forgets a line then you can pick it up and carry on.

Our performances are on the 28th, 29th and 30th of March at 7pm in the Second Story Theatre at 710 Pier Avenue, Hermosa Beach, CA, 90254. Tickets are available at www.daisypullsitofftickets.eventbrite.com