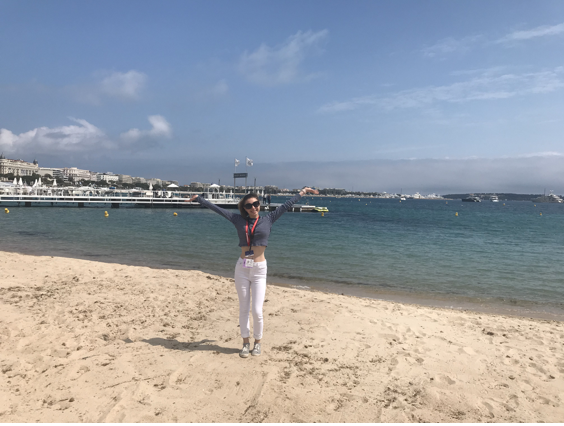 Posted at 16:57h in All, Festivals by IsabellaBT 0 Comments
0 Likes
Share
Cannes is a city in the South of France where a very famous film festival happens every year in May. Thousands of films are for sale in The Market Place at the festival each year. The first time I went to Cannes was with my movie Little Glory. This screened and was also there to be sold. I went to Cannes again in 2016 with the fashion designer Nancy Vuu to model at the Fashion Film Festival that happens at the same time in Cannes. I then went again this year. I was supposed to be there for a month but I ended up going for under 22 hours because of a family emergency back in LA. When I arrived, I immediately got my pass at the Palais De Festival. We had three films for sale there: Sand Angels, Pretty Outrageous and TLOLK: Shadows. It was amazing to see our posters up on the walls.
Each country that enters the film festival has a pavilion in which the filmmakers from those countries can have meetings and relax. My mum and I love to sit in the American pavilion because we meet and have met so many wonderful people there. There are several events that also take place each day and talks and panels. This year was special as a female filmmaker because everyone was encouraging a huge range of diversity in the industry.

I managed to also attend a red carpet event and meet some old friends. It was a whirlwind of a visit. I’m really looking forward to attending next year with Mother Daughter entertainment and our latest slate of films.